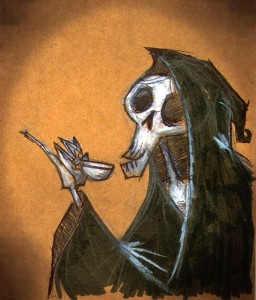 In cities around the world, people gathering over tea and cake to talk. But this isn’t your usual “coffee talk” discussion. These are gatherings where the attendees can discuss in depth what’s usually the unspeakable: death.

They’re called Death Cafes. And a quick search on http://deathcafe.com/map/ will reveal that there are groups meeting around the world; maybe even in a city near you.

As passionate as I am about leaving a legacy, I have to admit that this concept seemed pretty… niche. The first image that comes to mind is a room full of goth hipsters dressed like the trenchcoat mafia, ominous Wiccans, chatty atheists, and brooding fans of all things Tim Burton.

The report by PBS showed me that the crowd was actually not like that at all.

Death Cafe groups usually range in age from 40-65 and have been popping up around the world since 2011. The attendees will break up into small groups and share in discussions about questions they’ve probably never considered before:

The group I attended had a couple dozen people. There was a range of belief systems; and a range of attitudes on the topic of death. Some were somber about their failing health. Some were perplexed and looking for answers. A select few amazed me by how that were able to maintain their sense of humor about a subject that’s normally considered so morbid.

Ultimately, I’m grateful for the experience of attending my first death cafe, and I would gladly do it again. The small group discussion part of the meeting felt like a support group where we all helped each other be brave enough to stare into the face of the Grim Reaper.

By not turning away from such a grave and taboo subject, I believe many of us walked away from the meeting a little bit stronger. A little bit braver. And a little bit more appreciative of every moment we have left in this life…

Have you been to a Death Cafe? If so, what was your experience like?